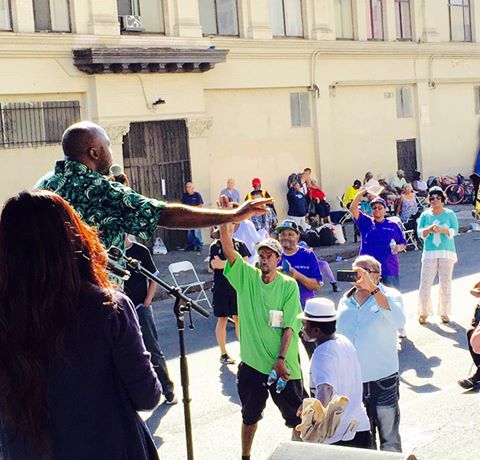 The Row 10 Year Anniversary was a  power-filled day! Arriving at the corner of  5th and San Pedro, I found our church family setting up for the day’s events. As I looked around, I noticed something right  away...  many of the people who live in Skid Row, whose faces are often riddled with sadness and despair, were smiling! On August 13, 2016 on a hot and sunny summer afternoon- hope was tangible in Skid Row.

As the day went on and those who came to serve set up the food tables, clothing tables, booths and tents, the excitement of the “mic check” came booming from the stage. The day went by, and hundreds of people came to celebrate. Many were able to receive clothing and have a bite to eat. Some stopped for prayer or even just some thoughtful conversation at  the prayer booth. Many others danced and worshiped in the streets, enjoying the live musical performances of several local artists and poets. There was a feeling of liberation in the air. In the matter of one afternoon, people who have been bearing such heavy burdens were able to lay it all down and be  free!

Guided by the Holy Spirit, Pastor Cue conducted a powerful Libation prayer that afternoon, and stood together with Clergy, Community Activists, Press and others to declare of a State of Emergency in Skid Row. You can read the full article on our blog.